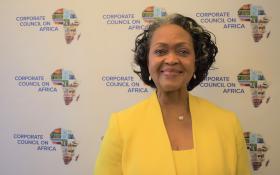 As we look back over the last months of 2022 and then forward to the 2023 U.S.-Africa trade, investment and business relationship, I cannot tell you how delighted I am that CCA had the privilege of collaborating with the U.S. Government and other partners to organize the U.S. Africa Business Forum – a central part of the Biden Administration’s December 2022 U.S.-Africa Leaders Summit held in Washington, DC. I confess to quietly crossing my fingers when the Summit was announced in July at CCA’s U.S.-Africa Business Summit in Morocco that the United States could organize a successful U.S. Africa Leaders Summit – only the second one ever – in the five short months it had to do so.

Well for all of you who participated in the 3-day Summit attended by President Biden and VP Harris, over 40 African Heads of State, dozens of African ministers, senior USG officials and hundreds of U.S. and African CEOs and private sector executives or attended the many side events, I know you join me in saying that it was incredible and impactful on many fronts. First, on messaging – the USG made clear that Africa is a critical partner for the United States and important in resolving global issues from food security and health to energy, climate change, peace and security, digital transformation, and more. With the collaboration of many U.S. Cabinet Secretaries and senior USG officials, a number of MOUs were signed and initiatives launched. And the USG backed all of this up with a commitment to invest at least $55 billion in Africa over the next three years. As for the private sector, the U.S. Africa Business Forum on Day 2 of the Summit, highlighted the importance of increased commercial engagement between U.S. and African businesses and showcased investments and partnerships valued at $15.7 billion that will enhance trade, create jobs, and drive sustainable growth on both side of the Atlantic. There were far too many deals and investments for me to recount here, but check out our eJournal for more details of the commitments made at the USABF.

CCA was also honored to independently organize ten special events during the U.S.-Africa Leaders Summit week that featured six African Heads of State, many senior U.S. and African government officials, and numerous U.S. and African CEOs and other senior business executives. CCA’s members, event sponsors, and affiliates were able to collaborate with public and private sector leaders from across the United States and Africa to highlight the economic partnership between the United States and Africa in key sectors such as ICT and health, as well as in strategic markets like Botswana, Ethiopia, Malawi, Mauritius, Nigeria, and Kenya. I was particularly pleased that CCA launched the second phase of its Health Security and Resilience Initiative on December 12, with its characteristic focus on highlighting private sector innovations that can help deliver better health sustainably in Africa. I think you’ll enjoy the short video in the eJournal that highlights the CCA events of the Summit week.

While it would be well deserved to dwell on the success of the December U.S. Africa Leaders Summit and Business Forum as well as other events, let me move to the future. Though a date for the next U.S. Africa Leaders Summit was not announced, I really welcomed the announcement of Ambassador Johnnie Carson as the new Special Presidential Representative for U.S.-Africa Leaders Summit Implementation who will follow through on all the commitments made during the Summit and coordinate continued engagement with African leaders. We also were delighted that Witney Schneidman was appointed as the Coordinator of Prosper Africa and will be leading this USG whole-of-government initiative focused on strengthening the U.S.-Africa trade and investment relationship. It was a major signal to Africa and the world to host the U.S. Africa Leaders Summit at the mid-point in the Biden Administration. Now is a critical time to build on the momentum of the Summit by establishing the framework and processes for continued and stronger partnership with Africa. Already we see this week that Treasury Secretary Yellen is visiting the continent, and we understand that other U.S. Cabinet officials not to mention President Biden and Vice President Harris will travel to Africa. The next two years is an opportunity for the U.S. – government and private sector – to “up our game” in Africa and to be the kind of partner to African nations that only the United States can be given the historic ties of the African and American people.

As CCA enters our 30th year as an organization, we look forward to continuing to be a platform for key U.S. and African government and private sector decision-makers to advance more significant U.S.-Africa trade, investment, and commercial engagement. We look forward to being a strong partner of the USG in following up on the Leaders Summit, and offer CCA’s U.S. Africa Business Summit to be held in partnership with the government of Botswana in June 2023 as a perfect opportunity to keep the momentum going on the important U.S. Africa economic relationship. Please be on the lookout for our Summit “save the date” as well as our calendar of 2023 events.

Best wishes to you for a healthy and prosperous New Year!