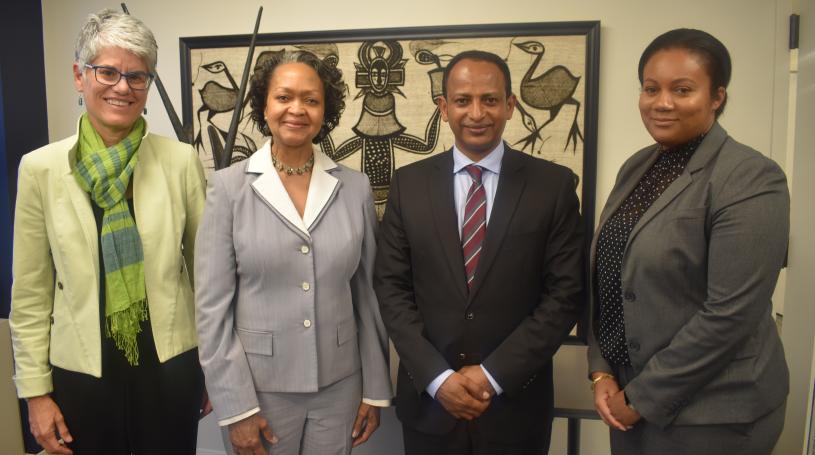 On May 2, 2019, Corporate Council on Africa hosted Amb. Fitsum Arega, ﻿Ambassador of the Federal Democratic Republic of Ethiopia to the U.S., as part of its High-Level Dialogue Series. Ambassador Arega was delighted to make CCA his first engagement with a U.S. audience on commercial and economic issues.  He noted that his “first, second and third” priorities are to increase trade and investment ties between the U.S. and Ethiopia.  He noted that it was a very exciting time in Ethiopia, with a lot happening under Prime Minister Abiy’s leadership, including peace with Eritrea and significant improvements in human rights and protection for media.

Ambassador Arega said it was a good time to look at business opportunities in Ethiopia, given that it is one of the fastest growing economies on the continent, and has been growing at double digits for the last 15 years.  Ethiopia has achieved significant progress in meeting Millennium Development Challenge Goals, including expanding access to health and education, and doubling the number of roads in the last decade.  Amb. Arega noted that the government is looking to continue this record of high growth by enacting further economic reforms, including privatization and liberalization.  The goal is to increase foreign direct investment, particularly in telecommunications, logistics, energy and aviation, where privatization could be partial or full.  The government has recently moved to set up a telecommunications regulator and is preparing financial statements to prepare for the privatization of Ethiotelecom.  The government is also looking to fully privatize its sugar factories as soon as it can.  He stressed that the government has undergone a major shift in mentality away from the idea that the government or public sector should be the biggest investor in the country, which it could afford only through borrowing, and it now understands that the private sector must be the biggest investor.

Ethiopia is delighted that the U.S. is responding with increased support from a number of areas, including the Millennium Challenge Corporation’s recent announcement that Ethiopia has qualified for a Threshold program.  Ethiopia is also excited about greater opportunities under the BUILD Act, as well as the upcoming Prosper Africa program to support greater U.S. trade and investment.  Ethiopia has been similarly pleased to see support from the IFC and the World Bank. Amb. Arega noted that Ethiopia faces a number of challenges, including the urgent need to generate more jobs for youth, where unemployment is a major challenge.   It is also important to enact further reforms to make it easier to do business, including starting a business, in the country.  Ethiopia will work with the World Bank to address remaining inefficiencies in access to credit, construction permits, insolvency and contract enforcement.  It recently agreed to work with the Bank on measures to improve access to foreign exchange, addressing an issue that has complicated the ability of foreign firms to operate in the country.   It is also important for the country to develop its potential in sectors like agriculture, where 80% of the population still work, including supporting exports of honey, coffee and sesame seeds.

The government is delighted that Ethiopian Airlines is the largest freight exporter from Africa, and Amb. Arega noted that it has just signed an alliance with DHL on freight forwarding.  Similarly, he welcomed investments by companies like John Deere in agriculture and PVH in textiles that were making a notable difference in the lives of Ethiopians and represented a real commitment to the country’s future.  He advised other interested American companies to follow their lead, and not come to Ethiopia “just to window shop,” but come with some serious thoughts about what would be needed to do a deal.  Amb. Arega also highlighted energy and infrastructure, noting that the government has just adopted a new public private partnership framework that should allow greater investment in toll roads, hydro projects and wind, as well as a mega solar project.  Ideally, he said that the government would like to encourage companies to invest enough to create 16 new manufacturing zones of the size of Hawassa.  He encouraged companies to look at opportunities in telecommunications, with the caution that the country is looking to foster competition, rather than replacing a public monopoly with a private one.