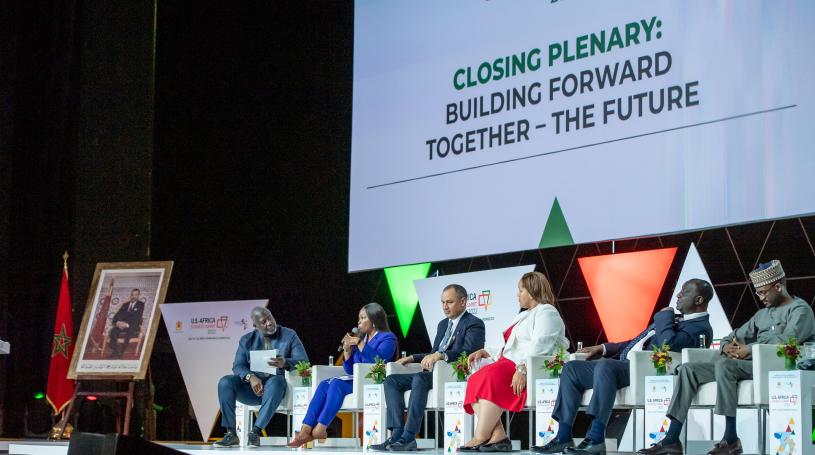 On Friday, July 22, 2022, Abdou Diop, the Chair of the Africa Committee of the Moroccan General Confederation of Enterprises, moderated the closing plenary on Building Forward Together – the future.  This session looked at a range of important initiatives to accelerate economic development and prosperity, including the launch of the Partnership for Global Infrastructure Investment at the G7 Summit June 26-27.  Speakers included the Moroccan Minister of Industry and Trade, Ryad Mezzour, the Ghanaian Minister of Trade and Industry Alan Kyerematen, Special Assistant to the President Dana Banks, the CEO of AUDA-NEPAD, Nardos Bekele-Thomas, the Senior Director for Global Government Relations of P&G Temitope Iluyemi, and the Group Executive Director of Tropical General Investments Farouk Gumel.

The participants focused on a number of aspects that make them optimistic about the potential to build forward together for the future.  Minister Kyerematen suggested four points.  First, we should look at the collective strength of the United States of Africa, rather than looking country by country as we all so often do.  He stressed the importance of the U.S. supporting the integration of the continent.  Second, he recommended looking at the key factors driving US-African partnerships.  AGOA was the first partnership, and it played its role.  US-African relations must change, however, to being driven more by investment, which in turn will bring the transfer of technology that African companies are looking for to become more competitive.  He suggested that the role the US played in making China the factory of the world can be replicated in Africa, as Foreign Direct Investment brings trade.  Third, infrastructure is critical.  There is a gap between Africa and the world, and he suggested a Marshall plan on infrastructure could move Africa to a new level.  Fourth, he suggested moving SMEs to the centerpiece of the relationship, noting the important role they play for the US.  Minister Kyerematen also cited several things that Africans need to work on.  He noted that there is a lot of mistrust between government and the private sector.  Governments can feel threatened by the private sector power, and sometimes the private sector influences government policy for its own interests, rather than the good of the country, which can merit mistrust.  To overcome this, he recommended Improving the business regulatory environment, institutionalizing dialogue between the public and private sectors and each country must have its own AfCFTA action plan.  Minister Mezzour echoed many of these themes, noting the significant potential that African countries have to stimulate economic growth in each other’s countries if they partner to build value chains.  He cited the example of Nigeria partnering with Morocco to replace fertilizer imports; as a result, there are now 49 fertilizer blending plants in Nigeria, creating thousands of good jobs.

The private sector participants welcomed the focus on better dialogue between the public and private sectors, and support for more integration.  Temitope Iluyemi noted the importance of US support for AfCFTA, and suggested that the USG should make its engagement with Africa more institutional, ideally with a conference every year or two.  She also suggested there needs to be more trade and investment promotion that brings companies together.  P&G supports a number of conferences that bring US companies into contact with SMEs and help incorporate them into value chains.    She also flagged one important step African governments can take to stimulate more trade, particularly with SMEs, namely completing negotiations under AfCFTA on the rules of origin.  She noted that the continent has completed almost all of its target, and suggested moving ahead with those sectors that are agreed now, and phasing in the rest as trade moves ahead, while also harmonizing regulations.

Dana Banks noted that the U.S. is focused on health security, supporting vaccine manufacturing, food security, digital divide, gender divide, women and youth and Biden’s plan on PGII.  Dana forecast there will be a new program on digital announced at the African Leaders Summit in December, although it won’t be called Digital Africa.