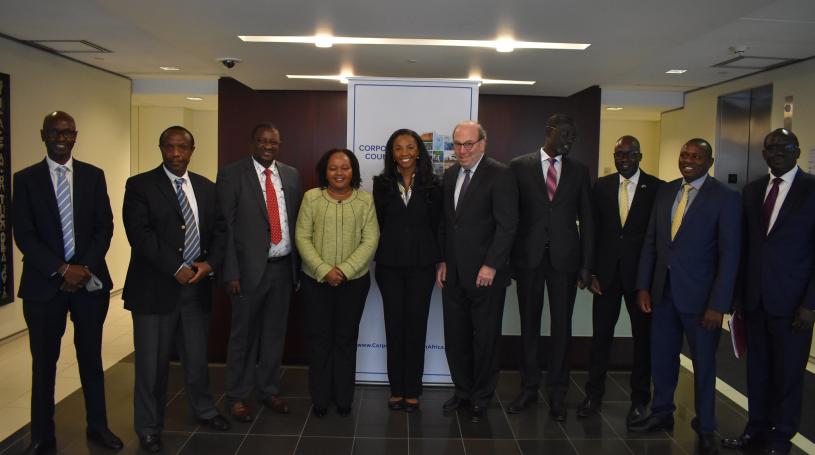 Opening remarks were provided by Witney Schneidman, Senior Policy Advisor and Head of Africa Practice for Covington & Burling LLP. He welcomed H.E. Wiaguru and her delegation and began by asking about the economic policies advocated in Deputy President Ruto’s upcoming election campaign.

H.E. Wiaguru stated her commitment to pursuing a bottom-up economic model, targeting those in the lowest part of the economic pyramid rather than large infrastructure projects with benefits that “trickle down”. Examples of Safaricom using microbusinesses to distribute products as well as a current initiative supporting farmers to create cooperatives for value addition were cited to support the bottom-up model. The campaign also placed heavy emphasis on job creation along with increased access to technical and vocational training.

A large focus of the session was on the need for economic policies to shift from capital intensive investments to greater support of small and medium enterprises (SMEs). In Kenya, SMEs contribute to approximately 30 percent of the country's GDP and account for 83 percent of employment. With such a sizable portion of the economy in SMEs, the campaign advocated for increased capital for these enterprises to promote greater productivity. Additionally, SMEs also require an enabling environment, a legal environment in which they can function, business support services, and social protections— all of which are of high priority to the campaign.

The question-and-answer section featured questions on infrastructure from CCA members such as Caterpillar, Citi, Manchester Trade, and Google. The campaign stated its commitment to investment in production that utilizes and eventually pays for infrastructure development.

Witney Schneidman provided closing remarks and expressed CCA’s continued mandate to support the economic development of African nations by continuing to provide a platform for discussions on engagement opportunities on the continent as well as U.S.- Africa collaboration for economic growth.