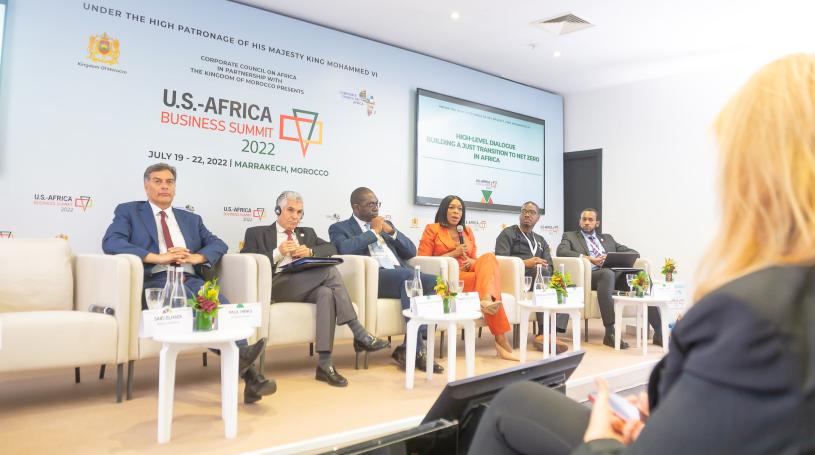 Paul Hinks spoke about the importance of Investment in new technologies to reduce emissions and the cost of energy which typically trickles down to the consumer. He mentioned the current high energy costs and how many people on the continent cannot afford it. Africa needs to utilize all energy sources to ensure the energy transition happens because 43% of people on the African continent do not have access to reliable power. Africa not only has a massive deposit of gas, but the entire continent can be the net exporter of fertilizer.

Mr. Mugambi spoke on the importance of energy transition and how it must be just and equitable. He eye talked about the difference between financing projects in Africa and other parts of the world that typically have different economic, political, and social barriers. He also shared that several key infrastructural components are not produced or readily available in Africa, including storage facilities, pipelines, etc.

Ms. Obuzuwa shared that energy transition is on the top of the agenda for Coca-Cola and is being implanted through its five value chains. She talked about energy transition moving down to the last mile in communities and the strong emphasis on renewable energy, reductions in carbon emissions, and recycling. Coca-Cola currently runs a sustainability program that launched in January 2022 for water security for communities and nature preservation.

Chevron has played an active role in reducing and capturing flared gas in the countries in which it operates, says Mr. Beye, Chevron’s General Manager for Corporate Affairs for the Middle East, Africa and South America.

Panelists expressed that governments need to be a lot more consultative on the energy transition discussion and stated the importance of paying utility companies on time. Innovation is taking place on the continent through the Chevron venture technology platform, hydro solutions, and captive power. Panelists also proposed investing in products like biofuels, cooking gas, LPG, and Hydrogen and emphasized the importance of building on Baseload power for economic development and natural gas financing. They noted that DFIs should tie projects leading to economic growth and that natural gas must be the transition fuel for Africa and the rest of the world.

This event is part of CCA’s Energy working group under the energy transition initiative. CCA works to convene key stakeholders to discuss strategic collaborations that support energy transitions to Net zero by leveraging the role of the private sector on the path to economic recovery on the continent.