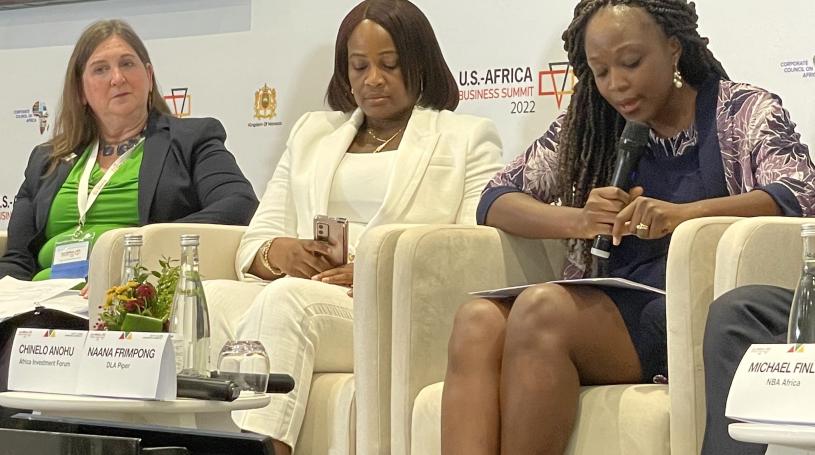 On July 21, 2022, the Corporate Council on Africa hosted the Investing in Women and Youth: Sustainable Growth as one of the panels in the U.S. - Africa Business Summit.

The purpose of this panel was to convene leaders on issues related to women and youth with emphasis on the potential of these groups as well as the challenges faced and the solutions to those challenges. The session was moderated by Naana Frimpong, a partner and leader of U.S. - Africa engagement at DLA Piper. She began by providing statistics on youth being over 70 percent of the population and 70 percent of women encompassing the informal sector on the African continent.

First, the panelists discussed the potential that women and youth have in developing a sustainable African economy. Lamia Marzouki began in her capacity as the President of the We For She Initiative, a think-tank that helps to improve female representation at all corporate levels as well as provide economic empowerment to non-corporate level women. She stated that although there is an even wider gender gap in Franco- phone countries compared to their Anglo-phone counterparts, deliberate efforts to close these gaps through initiatives such as We For She help increase the potential of women in Africa. Patricia Obozuwa, a Vice President at Coca- Cola highlighted her

company’s diverse workforce and programs that have impacted women and youth, one which is a program that has empowered 2 million African women. In the international development sector, Chinelo Anohu spoke about the Africa Investment Forum’s role in preparing women led projects for bankability and ensuring the projects reach financial closure. She also mentioned the MOU signed with USTDA and celebrated at this Summit to promote Women as Investment Champions; a partnership that will further promote women led businesses. Ghita Lahlou, as the CEO of Ecole Centrale brought the perspective of the potential in the education sector, mentioning the outstanding female engineering graduation rates in Morocco as one of the highest in the world and the potential of retaining and tapping into this talent pool. In the area of sports, Michael Finley of NBA Africa spoke about the potential that sportsmanship brings to the continent regardless of education level as well as programs such as Junior NBA and Her Time to Play/Basketball Africa League, a deliberate effort to promote youth and females on the continent to play basketball. To close this segment, USTDA’s Gretchen KantzEvans highlighted the role of USTDA in developing partnerships and giving grants to the benefit of African rural communities, especially women.

The panelists gave their perspectives on the challenges that women and youth face on the continent. Challenges such as gender bias, lack of partnerships and sponsorship, challenges in project preparation, the mindset of women and youth, lack of infrastructure, lack of employment despite high education levels of women as well as informal rule-making processes within the corporate world that disfavor women.

Some of the solutions discussed amongst the panelists ranged from AIF’s resources to help women prepare projects for bankability to improved infrastructure and mindset shift to encourage participation in sports and increase Africa’s footprint at the NBA to increased USTDA- type partnerships which involve collaborators/local project sponsors who know their communities.

A question asked by a participant was the contribution that the different sectors represented at the panel have made to scale up skills/ small businesses of victims and perpetrators of crime following rehabilitation and the initial government support afforded to this niche group of women and youth. It was answered generally as a collaborative effort by all sectors and private individuals to help mitigate crime that will in turn, provide a more stable and sustainable society.

The session was very insightful as it dug deep into the various possibilities and untapped talent and resources that women and youth bring as the future leaders towards a more sustainable Africa.