"Presidential Dialogue: Kenya Business and Investment Roundtable" on the sidelines of the U.S.-Africa Leaders Summit 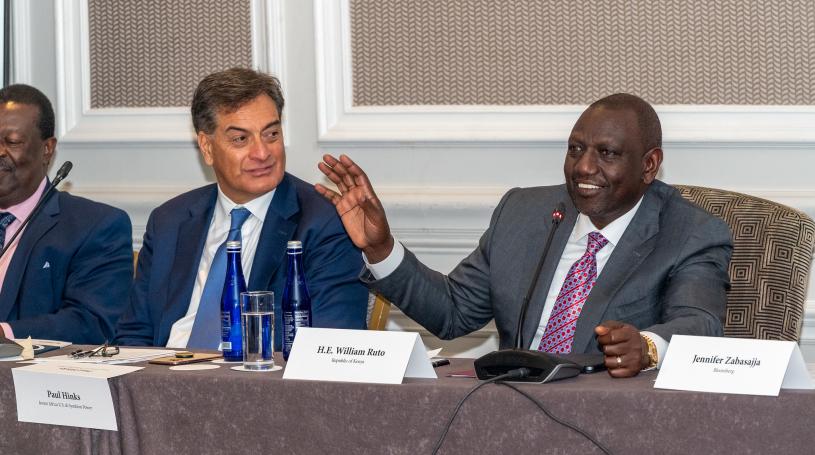 On December 16th, 2022, the Corporate Council on Africa and Invest Africa U.S. hosted the Presidential Dialogue on Kenya Business and Investment Roundtable featuring H.E. William Ruto, President of the Republic of Kenya. The session was moderated by Jennifer Zabasajja of Bloomberg and was attended by senior-level U.S. and Kenyan private and public sector leaders. The roundtable focused on President Ruto’s administration economic vision and initiatives for Kenya.

During his remarks, President William Ruto highlighted his economic vision for Kenya, including Kenya’s role in rectifying and pushing to unlock the full potential of the African Free Continental Trade Agreement (AfCTA), which gives Kenya a single market for goods and services to 1.3 billion people.  The President also highlighted his administration’s commitment that Kenya will provide a clear legal framework that gives opportunities to investors in terms of rights and protection of property rights.  Kenya is one of the most investor-friendly countries in Africa and has tapped into international frameworks and agreements to advance its economy.

Florie Liser, President and CEO of CCA, highlighted, as one of East Africa’s largest economies, Kenya is the business and financial hub for the region, and the U.S. investment in Kenya and bilateral trade are essential elements of the U.S.-Kenya relationship. Kenya is a priority country for the Corporate Council on Africa and shared that several CCA members are doing great work in Kenya across different sectors. To strengthen the U.S.-Kenya Commercial relationship, Florie announced CCA’s plan to organize a U.S. trade and investment mission to Kenya in early 2023.

Paul Hinks, Chairman of Invest Africa U.S. and Symbion Power, thanked President Ruto for sharing his insights and noted that American investors have serious intents to invest in Kenya and that the people participating in the roundtable represent trillions in capital. On the topic of investment, Paul Hinks mentioned about Kenya’s high debt distress and asked President Ruto how his administration plans to address this when talking to investors, to which President Ruto responded by saying subsidies were a massive driver in impoverishing Kenya’s economy. To fix this issue, he has worked on a program to consolidate the fiscal position and chop off billions of shillings from the budget to ensure the public sector is not crowding out the private sector. In addition, new targets have been set for the country’s revenue, and government offices and operations are now moving online, increasing visibility and transparency in tracking revenues and loopholes. Digitalizing government operations is projected to bring in a 5 trillion Kenyan Shillings in revenue in the next five years.

Alain Ebobissé, CEO of Africa50, commented that he was impressed by the president’s sense of urgency in terms of rectifying the country’s economy and invited President Ruto to share how he manages to convey this sense of urgency to his administration as this is key for investors to which the President responded by bringing into light the importance of teamwork and how each person in the cabinet has a specific role and how each team member’s goals play in harmony and result into a successful and well-functioning team to serve the country.

Representing the U.S. public sector, Hon. Enoh Ebong, Director of the US Trade and Development Agency, emphasized the U.S. government’s efforts in funding projects that are going to be bankable and that can be financed and sustained. As Kenya leans on the AfCTA’s framework and the country’s interest in the climate space, President Ruto shared that some of his priorities in terms of infrastructure is ensuring an agile bureaucracy and leaning on other agreements and frameworks such as AGOA to tap into these potentials and taking advantage.
The session also focused on Africa’s creative industry. As Victor Williams, CEO of NBA Africa, mentioned during the roundtable, by 2030, 40% of the global youth will be African. NBA is interested in Kenya to increase its investment in sports and keep up with the African youth’s innovation and creativity. President Ruto commented on Kenya’s creative industry and mentioned that his cabinet is actively working with big tech companies such as Microsoft, Oracle, and Google to promote the creative and technology space in Kenya and provide Kenyan youth with ways of monetizing their creativity and talents.

On Delta and Kenyan Airway’s announcement, President Ruto responded that he is seeking partnerships that will make Kenya Airways a profitable entity and wants investors to know that Kenya Airways is a very valuable entity as it is one of the top exporters out of Nairobi.

The session brought into lights Kenya’s business opportunities, such as the creative industry, renewable energy, and infrastructures, and has positioned itself as an investor-friendly environment with functioning frameworks and many untapped opportunities. Kenya is pushing to develop water purchase agreements and receive support from the government to build a dam. Additionally, a new program for Kenya’s battle against climate change is to plant 15 billion trees as part of the government’s intervention and ensure that the electricity used in Kenya is 95% renewable. 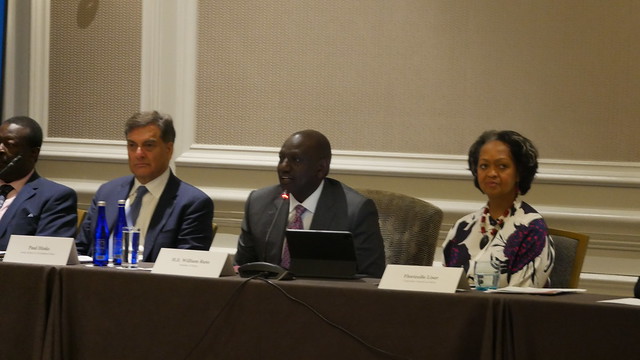