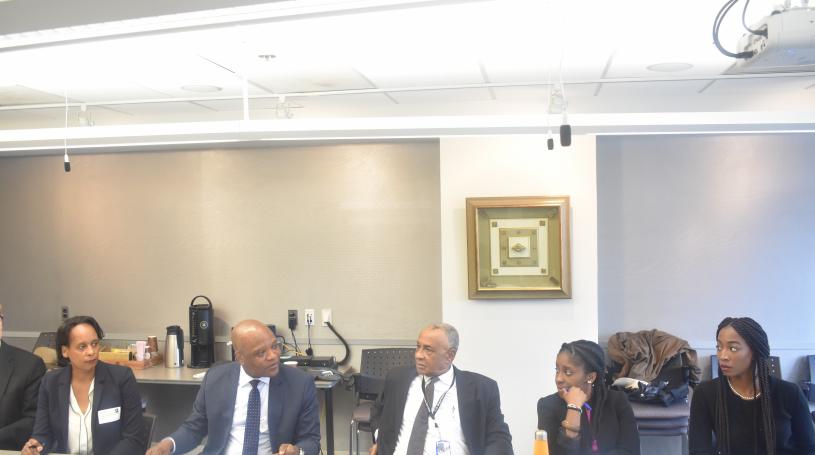 The discussion focused on a range of ongoing projects in Africa, specifically highlighting opportunities for private sector engagement and the progress made by ACDC since its establishment in 2017. Dr. Samuel Adeniyi-Jones, began the presentation by highlighting the importance of the ACDC and how both organizations work together to address major health issues in the region. He said that ACDC initiatives provide support to AU Member States’ public health emergency preparedness and response efforts, communicable and non-communicable disease control/prevention through health systems strengthening and policy harmonization.

Dr. John Nkengasong, Director of the Africa CDC, spoke about both the accomplishments and challenges of the newly formed Africa CDC. In 2017, the Africa CDC was founded to combat the Ebola outbreak and has been implementing key systems to help stop the spread of diseases ever since. Dr. Nkengasong noted that changing dynamics in Africa such as urbanization and increased mobility of people enables diseases such as Ebola and Cholera to spread more rapidly. He said that strategic partnerships are crucial in stopping the spread of diseases saying, “[There is] No way we are going to do this wholly through the public sector… [we are] calling on others to join us in this important endeavor.” As a result, the “New Public Health Order” put out by the ACDC strives to strengthen networks and build public health capacity in order to provide better coordination across Africa’s health systems and value chains. Overall, the roundtable discussion brought attention to the necessity of public-private partnerships in furthering the work of the ACDC.