“Technology Driven Africa – Advancing the Digitalization Agenda” on the sidelines of the U.S.-Africa Leaders Summit 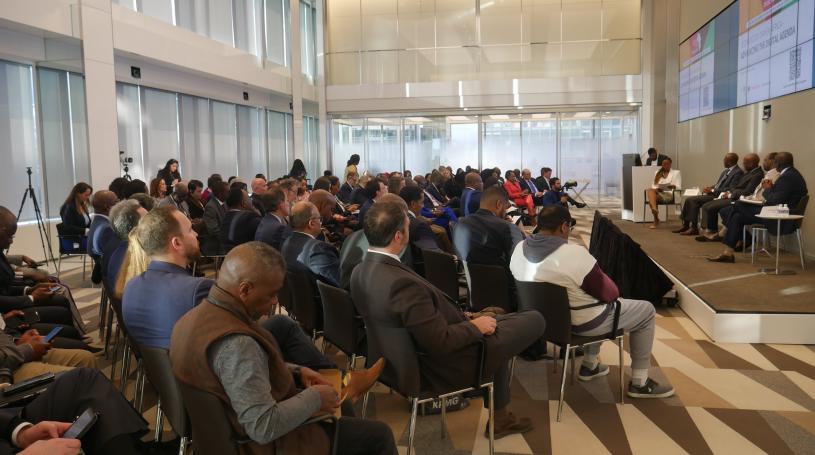 On Monday, December 12, 2022, Corporate Council on Africa hosted a forum themed “Technology Driven Africa – Advancing the Digitalization Agenda” under the sponsorship of Cybastion, Inc., a leading cybersecurity company providing advanced cyber solutions to the public and private sector, hosted by Covington & Burling LLP, and organized in partnership with the Millennium Challenge Corporation (MCC). The event convened industry and government leaders to highlight the remarkable digital challenges and opportunities on the continent while advancing U.S. businesses’ comparative advantage and potential for increased contribution to improving the socioeconomic landscape of the continent through technology. The program featured keynote addresses, panels, networking opportunities, and spotlights showcasing the work of the private sector and highlighting key areas of opportunity to expand public-private partnerships for both the U.S. and African countries.

Florizelle Liser, President & CEO of Corporate Council on Africa flagged internet access as a key challenge to advancing digitalization, noting that as Africa has the lowest internet penetration rate in any of the geographic region in the world, underscoring the importance of “continuing efforts by the public and private sectors including major multinationals, startups, the African Union, national governments, and multilateral organizations which have already dramatically increased the number of Africans with internet access.”

The first of two high level panels addressed the theme “Harnessing Technology to Drive Economic Growth.” Moderated by Mosa Mkhize, Johannesburg-based Policy Advisor at Covington & Burling LLP, the panel discussed the potential for public-private engagement to prioritize evolution of the regulatory ecosystem – statute, regulation, institutions, digital infrastructures, sustainability, and cybersecurity – while elevating opportunities for a strengthened enabling environment that ensures that businesses, especially SMEs, can leverage the opportunities provided by the digital economy to foster sustainable economic growth on the continent.

Representing the U.S. public sector, Hon. Mahmoud Bah, MCC Deputy CEO, emphasized the positive impact the COVID pandemic had in terms of rapidly advancing the use of technology for both private and public sector services. “Given the clear role of the technology sector at the heart of other critical sectors such as health, education and government services, the American public and private sectors must now seize the opportunity to act as partners, and accurately assess the problems Africa is trying to solve such as institutional reforms to advance digitalization,” said Bah.

Panelists also noted that the private sector role is crucial when looking at technology as an industry and a pathway to growth, as digitalization is at the center of education, healthcare, and industries alike. Founder and CEO of Axxess, Nigerian-born John Olajide, noted that many U.S. investors have a far-too-short investment horizon, and that his investments seek not short-term profit and return, but rather to have a long-term positive impact on African communities and sectors. “Yes, I want to make money, “said Olajide, “but even more, I want to make a difference.” Bramuel Mwalo, CEO of Xetova, underscored the importance of designing collaborative partnerships between the government and the private sector as a key to closing the digital gap on the continent. “Technology on the continent has shifted from simply investing in digitalization to now thinking outside the box in terms of leveraging technology to create value-added activity indigenous to Africa,” said Mwalo.  A sentiment that Dr. Thierry Wandji, President & CEO of event sponsor Cybastion endorsed. “Africa’s time is now – America’s time to partner with Africa is now – Cybastion is doing just that, with government and the private sector.”

Moderator Michelle Caruso- Cabrera, CNBC Contributor and Former CNBC Anchor / Senior Foreign Correspondent, steered the second panel dialogue titled “Accentuating Africa’s Digital Connectivity.” Building on the substantive discussion in the first session, panel members addressed some of the challenges to strengthening business and government collaboration between Africa and the United States that could hinder digitalization as a key driver of economic growth. “The industry is accustomed to managing government regulation, but over the past several years the IT industry has become the most heavily regulated sector,” said Microsoft Associate General Counsel Daniel Brown.  If Africa’s governments could harmonize and streamline regulation across the continent, said Brown, “The upside potential for growth would be huge.”

After comments that there was a need for substantial and consistent capital investment from U.S. companies and investors, moderator Caruso-Cabrera noted that capital will flow where it is rewarded and asked, “What needs to change to create those conditions?” Trimble Inc. Vice President & Executive Director Albert Momo agreed. “That is a fundamental rule of economics – the capital will come, given the right conditions which still don’t yet exist in many countries.”  Panelists agreed that more robust data regarding risk to investments needs to be developed and speculated that implementation of the African Continental Free Trade Agreement could provide a vehicle for modernization and harmonization of regulatory environments, in turn providing more predictability and stability for private sector investors.